The Global Food Crisis today is tragically compounding the lasting effects of the pandemic on women and girls’ nutrition.  We know that malnutrition is both a cause and effect of gender inequality.  Even prior to the-pandemic, women and girls were disproportionally malnourished, representing 60% of the 811 million undernourished people worldwide. 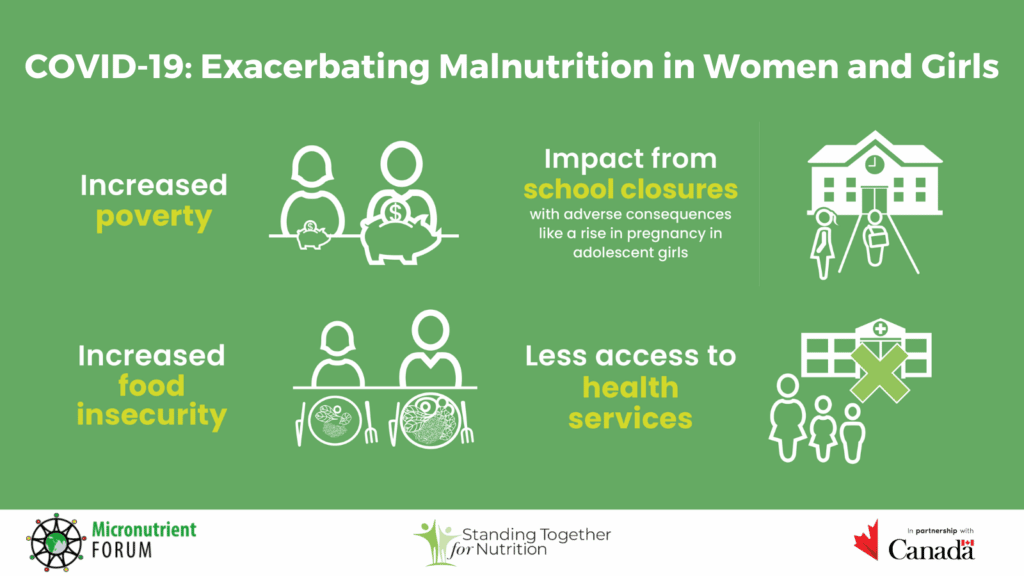 These shocks and disruptions were amplified by women’s inequitable access to power, agency, and decision-making, leading to increased food insecurity and poverty for women and girls, particularly in low- and middle-income countries (LMICs). During the pandemic, an additional 47 million women and girls were pushed into poverty. Estimates are that women are taking longer to recover from these job losses, placing them in a vulnerable position as food prices rise.

The Global Food Crisis threatens to worsen women and girls’ nutrition.
Loss of income increases the risk of poverty and makes healthy food less affordable. Additionally, a loss of income may reduce women’s decision-making ability to direct resources to their own and their children’s nutrition and health. Last year, in 2021, a staggering 150 million more women than men reported hunger in 2021.

Now with the global food crisis further driving food unaffordability, women and girls are more at risk of malnutrition. We know that when food prices rise, families often reduce their overall food intake, particularly nutritious foods. Women and girls have high nutrient requirements, yet gender norms constrain them to often eat last and least.  In particular, anemia is a serious health challenge, caused by a lack of micronutrients -mainly iron- and infectious diseases like malaria, which causes fatigue, lower resistance to disease, and reduced cognitive ability. Recent data estimates on the global burden of micronutrient deficiencies highlights that over two in three women of reproductive age worldwide suffer from deficiency in at least one micronutrient, such as iron, zinc or folate.

Malnutrition also has a devastating multi-generational impact on human capital potential as malnutrition during pregnancy and in a child’s early life leads to impaired brain development leading to poorer school performance and lower adult economic productivity. The consequences of women’s and girls’ malnutrition to society are immense – malnutrition is estimated to cost 3.5 trillion annually.

Call to Action: We must end the inequitable burden of malnutrition for women and girls.
Global and national policy makers must integrate and scale up women’s nutrition and gender empowering actions to offset the lasting effect of the pandemic and the global food crisis’ harmful impacts on women’s and girl’s nutrition, health, and human capital. Together we must end the inequitable burden of malnutrition, health and poverty for women and girls. These actions must also be sustained in longer term agendas that prioritize women’s nutrition and equity.

PrevPreviousDr. Saskia Osendarp’s Opening Remarks on Climate Change at COP27 Event
NextSign-On to a Community Letter in Support of a Proposed WHO/WHA Resolution on Food FortificationNext